I had just finished the Transatlantic Way Race (TAW) in Ireland, my hands and fingers still recovering, my neck muscles were stronger than ever having to endure over 120,000ft of ascent and cycling 18 hours a day to reach 200+ miles a day. Having trained the body is one thing, preparing your bike for such a race is another.

An elite few had other plans to win the race but I’d already felt like a winner making it to the start line sharing such an epic moment, an endurance rider hoping to cycle across the European Continent and self supported. Every rider that got this opportunity in life were all winners, the true journey had begun when the application to enter the TCR was sent and the waiting began while training schedules put in place.

We had to do 2 circuit loops of the famous Muur before making our own chosen route to check point 1 in Gaschurn Austria. Within minutes of leaving the cheering crowds and the buzz of excitement the silence of the night kicked in, finally nothing else mattered, the worry of my bike set up, the weight of my kit, spokes, dynamo, sleeping setup and tyre choices along with puncture prevention sealant to protect my tyres for thousands of miles, all that mattered was how to get to CP1 before closure time displayed on my brevet card tucked inside my frame bag.

A few dotted rear red lights flashed in front of me, I passed numerous riders still rectifying their pace for the night ride through Belgium, France and probably Luxembourg and Germany. I pushed hard and had a steady 20mph, all I could hear was my breathing and the odd cyclist that overtook me, the race was on. It was very warm, my 2 bottles of water proved to not be enough during my first night of riding, I recall searching for water, looking for a 24 hour petrol station but mile after mile my thirst grew with a vengeance. I met 2 other riders with the same predicament as I diverted to a lit up car wash…….still no water taps or open shops. Our thirst was resolved when cycling through a small village, I had never been so pleased to see a drinks vending machine sat solitarily outside a bakery at around 4am. The lights from within the bakery showed  someone working hard preparing the bread and cakes, but still too early to open, more miles were to be covered before my first bakery stop.

Sitting in the race position with arms and elbows in the tri-bars puts a lot of strain on the body, especially the stomac. I had Sadly torn my stomach years ago with a large 12inch hernia running from my torso to my pelvic bone, but after years of debating to have surgery to rectify the minor cosmetic strain I had become accustomed to the uncomfortable feeling it gave during various sporting activities. After 6 hours in this race position I was beginning to think I may regret not having the operation due to the pain I was feeling, I pushed on, through small Belgium villages, through large forests where suddenly the first daylight was visible, the sunrise was extremely special after an almost full moon night that lit up the road. I was surprised that no one had passed for many hours, part of me wondering if my route was a quick one and a small part of me wondering if I was cycling too fast for a  TCR start? Enduring the race pace was to be important but I just continued at my current pace.

When cycling at night I always use Fhoss safety lighting as it provides a bright light from front to back and on both sides, I felt safe at all times. It was around 6am before I realised I’d not seen another cyclist for around an hour. I pulled up to a small bakery in a village, I could smell the fresh bread from the bakery around half a mile away from the village and was so pleased to see it was open. Within a few minutes other riders arrived, Mikko Makipaa rider No:TCRNo6Cap04 Will Armitage rider No:TCRNo6Cap and Karolina Maciejewska rider No:TCRNo6Cap063 arrived soon after. Bakeries became a regular visit on a daily basis for cakes and bread, a much needed calorie diet for endurance cyclists…..eating anything and everything became the TCR motto to me, due to the massive calorie burn each day (8-9,000 calories) I briefly passed through the French border before re-entering Belgium, my route was more direct heading towards CP1, entering Luxembourg leaving the beautifully green and flattish Belgium roads behind and once again re-entering France.

I was aiming to reach Strasbourg in my first 24 hours of cycling outright with no stops, I managed 242 miles in my first 24 hours, just missing out on a 250 landmark, long miles and longer days were to follow, it soon became a natural train of thought, the daily ascent was a different factor. 150,000ft was predicted on my route, over 14-16 days it would make each day a marathon of endurance sportive rides.

My first iconic City during the race was Strasbourg, a City I had cycled through in 2018 during my Eurovelo Rhine route cycle to celebrate the 200th Anniversary of the bicycle. A beautiful riverside location full of architectural gems and cycle friendly networks of paths and lanes. My first encounter with a driver while sat at temporary traffic lights, a lady driver in front of me decided she’d waited long enough and suddenly reversed to drive around the patiently waiting queue of cars, I swiftly stepped backwards while half clipped in on my left pedal but the momentum took the front wheel to my left and the bike underneath me. I found myself on the ground and a small cut to my finger, nothing major, I looked up and in my surprise the lady driver had already began to drive away. A quick plaster repair on the finger and it was back on the race. From Strasbourg crossing the river entering Germany gave me some race momentum, one country down, 13 or 14 to go! Gaschurn in Austria control point 1 suddenly felt much closer.

Day 1 or technically day 2 of the race was hot, humid with little breeze, temperatures of 32-35 degrees must have put all riders into a fluid overdrive, whenever my 2nd bottle was empty I began to look for shops or petrol stations again to replenish and refuel. A bottle of sugary drinks like coke or lucozade and the other water. I didn’t want to find myself in the dehydrated thirst panic of the past night, it was to hold me in good stead for the rest of the race. My route had been nice and flat until pre-Strasbourg but was levelling off again until the Austrian Alps.

Belgium was behind me, France too and on into Germany and a swift ride through Luxembourg. I was looking forward to reaching Lake Konstanz having enjoyed the beautiful lake in 2017. I reached it as the sun was rising, it looked beautiful, a few other riders had continued through the night and we kept passing one another. Dario Demarco was one and a Daniel. Powerful lights are what makes night riding enjoyable, seeing a potential hazard well in advance of actually hitting it or swerving to miss the pot hole. The best strong lights need lots of power, either in battery form or powered by dynamo with backup battery when stopped. I had opted for dynamo rather than carry a heavy backup battery for device charging. The perfect setup would be having both as charging a gps device, mobile phone and lights takes a lot of charge, therefore using your dynamo to charge your devices during the day and essentials from your battery pack when stopping for decent meals. The rest of the race can be found at my website – British Adventurers & Jason Smith

TAW – The Race Around Ireland

I’d achieved my goal of completing the TAW just 5 weeks prior to the TCRNo6, it was almost the perfect training and preparation cycling the coast of Ireland for what was to come during the race across Europe. I had changed my wheels to DT Swiss with better rims and stronger spokes and I had kept with my trusted puncture prevention sealant from Bike-Seal, cycling 7,500km without a single puncture is incredible and something I would shout from the rooftops to every cyclist that hates punctures. The average rider cycles around 150 miles per month so for me 7,500km in less than 4 weeks was slightly insane, the combined ascent altitude was equivalent to riding up to the summit of Everest no less than 9 times. Cycling across all surfaces, road, trail, path and gravel. The Sarajevo ascent and descent was by far the worst gravel paths I have had to ride with just 28mm tyres I was paranoid I would get problems or numerous punctures due to the jagged stones and gravel but alas, bike-seal never let me down. On finishing my races I had checked the condition of my tyres front and rear, I could clearly see where my tyres had been damaged with debris, stones, glass and cuts but the puncture sealant did it’s promised job of self healing the tyre while rotating. I never even knew it had happened until after each race. 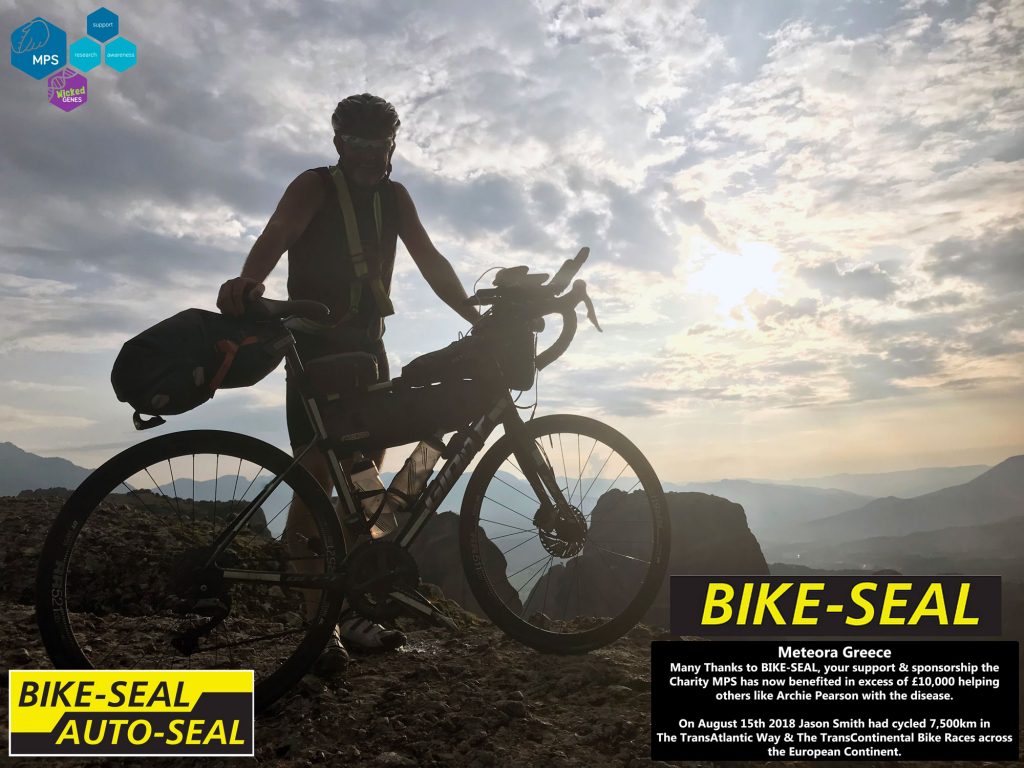